We got up earlyish on May 25th as we were hoping to set out on our road trip to Florida by 7am.

Man-Farmer went out to the barn as he normally does to open the pasture gate for the pony, Buttercup Luck.  He opens the chicken coop door so that the 4 chickens and 8 juvenile birds can start their day of pecking around on the ground looking for bugs and worms to eat.  He provides fresh water and scoops out chicken feed into two bowls for the poultry crew, ducks included.

He was headed back to the house to start getting himself ready for the two day journey…he had packed the blue minivan the evening before, he just needed to fill his coffee mug and take a shower…when he saw her.

Or A duck, as he didn’t know yet who it was, was lying under one of the giant 100 year old walnut trees that sit between our house and the barn.  The duck wasn’t moving.  The duck was dead.

A large hole was on her chest, under her wing.

It was Daffy, the white Indian Runner duck…the lone female of the original 4 ducks we got 2 years ago.  The male ducks all look alike, but Daffy was smaller and her coloring was lighter.  Male ducks, called drakes, quack.  Females rarely quack.  Their voices are softer and more whispery.  The males are the guardians for the females.  They are always front and center.  As you can see from this photo…that’s Daffy in the back.  With the 3 males standing tall in front of her.

When Man-Farmer found Daffy he noticed that the other ducks were still hanging about.  But that another white male was missing.  We had named all of the ducks when they were babies, but as they grew and continued to all look alike, it was hard to tell who was who.

I hoped it wasn’t Charlie.  He’s my favorite.  He’s the only duck out of the 6 that we have that will come close to me.  He follows me around when I’m in the barnyard or out in the horse pasture.  He follows me to the gate to the outside world and gets within inches of leaving with me before high-tailing it back to the group.  He would occasionally let me pet his bright orange bill.

We had no idea who was missing.  But as we were getting ready to disembark on our road trip south to see a wizard in Florida, we had no time to analyze the situation more.  Man-Farmer dug yet another hole to bury a pet on the farm.  Little sister was outside crying that sweet Daffy was killed.  We finished putting our snacks and cooler in the car and we drove away.

Hoping everyone would be okay while we vacationing.  I called my parents to tell them what had happened and that we were down to 2 white ducks, 2 brown ducks.  My parents would be coming down multiple times a day to check on our crew…dog, cats, goat, horse, chickens, ducks, and even a hermit crab.

I received a text the next day from my dad that there were still 4 ducks.  No more death.

I thought more about it as we were driving and I figured it had been Charlie who had been taken away by some predator for a meal.  He’s the most social and seemed the bravest.  We had thought about what animal killed one duck and left it and stole another away.  We have been hearing a lot of coyote howls lately and Man-Farmer had even seen two out in the field south of our barn some weeks ago.  He yelled at them and they high-tailed it back into the woods.  Or was it a hawk?  An owl?  We have many of all of these wild creatures hanging around our homestead.

We made it home nine days later and when we arrived the remaining ducks were sitting by our pool which sits right behind our house.  Why are they sitting there?

My parents came over shortly thereafter and my dad said that the brown duck (a Khaki Campbell named Patty) had been sitting behind the garage since we left as he had also noticed right after we left that the ducks were hanging out by the house and they were dirtying up the water bucket we keep outside for the cats and the dog to drink out of if they get thirsty.

Patty was sitting on a nest.

A nest full of eggs, maybe 8 or so.  It’s hard to tell.  She stays there for long periods of time, hisses at anyone who tries to look at her.  The dog, Willie, keeps trying to look for her in the brush she’s hidden herself in.  He can smell her but it’s hard to see her.

The remaining males have taken to guarding her as she’s nesting. They will occasionally go to the barnyard to have a swim in their pool or peck around in the tall grass for bugs.  But, they have started spending most of their day right behind the house.  Sleeping and guarding.

And as we started settling back into life at home after vacation that we noticed something else.

He was still amongst the living and he was talking to us and following us around and he’s even gotten VERY close to coming into the house via the back door. 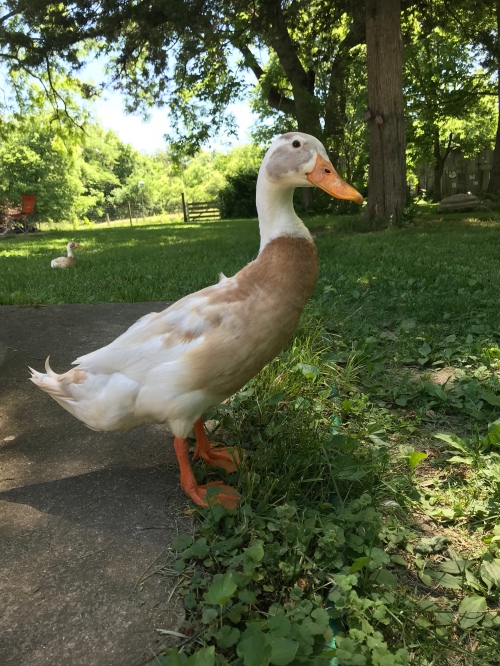 But happiness wouldn’t last too long.

Tuesday, two days after our return from vacation, Little Sister came running into the house screaming “Whistle is dead!”

Whistle is one of our original light brahma chickens.  She’s the orneriest hen we have and there she was…laying dead in the barnyard.  I had just taken this photo of her the day before.

Here it was, the middle of the afternoon on a hot summer day, and Whistle was just laying in the open…dead.

I told Little Sister that Whistle was old and probably just died.

But, my real thought turned to predator.  And that predator had to have been a hawk.

As I went to pick Whistle up (so Man-Farmer could once again bury a pet because his daughters would insist) I glanced skyward and saw a brown bird.  A hawk.  I think she was picked up and dropped by the hawk.  A failed attempt at lunch.

The chicks, well they are juvenile birds now, had all put themselves into the chicken coop. Something had scared them.  They stayed there, all on their own, for the rest of the day.  The other chickens, Genevieve and Pepper, were hanging out under the tree in the outdoor chicken run.  But George Washington, our favorite and most personable hen, was no where to be seen.

Not again, I thought.

Not another “dead bird with one missing” scenario.

I looked everywhere for George and never found her.

Man-Farmer locked the birds up when nightfall came.

When he went out to the barn the next morning to open the barn doors, there she was!  Just in the barn, running up to him.  George was still alive!

But, where had she been?

Man-Farmer didn’t let any of the chickens outside into the barnyard.  I asked him not to in case that hawk was still hovering around looking for a meal.

I went out to the barn after the humans had eaten their lunch.  I hadn’t seen any hawks soaring about and thought I would let the chickens outside.  As soon as I opened the main barn door, George Washington bolted out.

She’s always hated being confined.  She likes her freedom.

I thought I saw her a little later on in the day hanging around near Tulip the one-horned goat.

But as nightfall came, she wasn’t in the coop with the other birds when it was time to secure them.

She wasn’t in the barn this morning when the chickens were set free to explore their chicken world.

I don’t know if she was taken or if she has packed her chicken bags and moved away.

Is she mad that we left for 9 days?

Is she mad that those ducks (who she has never really tolerated too much) are in her territory near the humans, near the house?

I don’t know what’s happened to her. 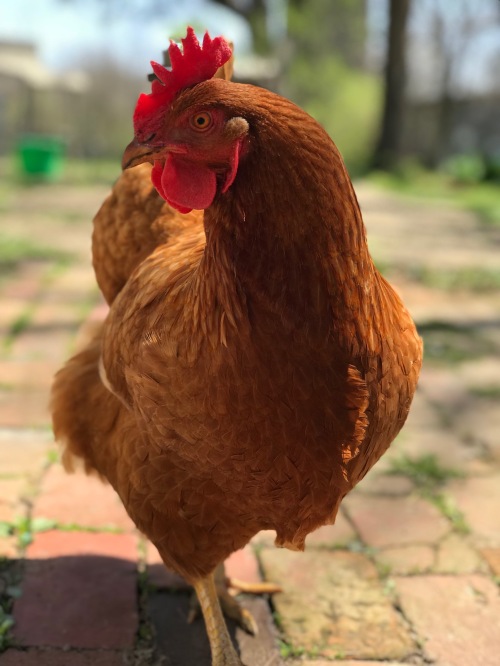 Man-Farmer is just as upset that Patty the Duck is laying on eggs and apparently incubating eggs to make baby ducks.
He doesn’t like the ducks.  He doesn’t want more ducks.

But it’s as if the forces of nature are working hard to replace the birds that have been lost.

Life on a farm… 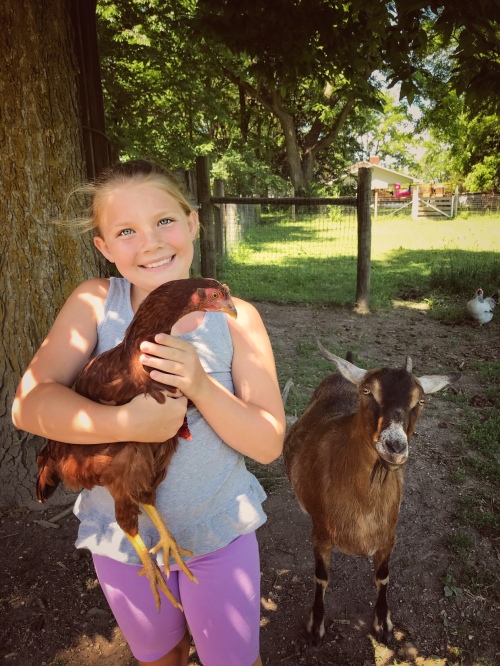 Volleyball #meridianhawks #volleyball #fifthgrade #mes #team #tweens #sport #gigisfirstteamsport #serve #overhandserve
This gal won her school spelling bee! #meridianhawks #mes #spellingbee #sonervous #firstplace #topspeller #smartgirlsrule #iwassweatin’
A year ago today our family lost our guy. Father Husband Best friend Calmness in any storm While our loss doesn’t affect your daily life, please know that it does affect us every morning that we wake up as a trio instead of a family of four. Please know that loss does not vanish or get easier. Please know that my children are still fatherless everyday. My loss is much different than their loss...theirs is harder. I don’t tell you any of this so that you will feel sorry for us. I tell you this to remind you to LIVE. Live your life with purpose. Live your life with love. Live your life with compassion and empathy. Remember those in your own life who left too soon. And don’t forget to hug people. a hug=touch=connection As a way to honor Chad and those in your own life who have unexpectedly left far too soon, HUG someone extra long and hard this week. Don’t be the person who lets go first though... #family #widow #loss #anniversary #live #hug #movingforward #familyofthree
Traveling around the world on vacation. #vacation #wdw #epcot #waltdisneyworld #animalkingdom #family #sisters #daughters #widow #winterbreak #florida #italy #germany #uk #france #china #japan #nepal #norway #norsegods #norsemythology #mexico #stitch #liloandstitch
Sunny Florida in January #vacation #florida #swim #sunshine #january
Some cool mini videos Disney does with your photo pass pictures. #disneyworld #wdw #florida #vacation #starwars #upthemovie #towerofterror #sevendwarvesminetrain
Follow Cheshire Farm on WordPress.com