The first week of the new year, 2018, has already come and gone.

Days are still cold and the nights even colder.

In Illinois, we are used to the cold blowing across the prairie, causing the snow to drift into largish mountains of white.  Blocking the view, hampering the walk to the mailbox.

We haven’t had too much snow yet, and we may not get a large amount by the time spring pushes it’s head out of the ground in the form of purple crocuses and alfalfa in the pasture.

While I don’t like the cold weather (neither does Man-Farmer) we do try to get out and continue to enjoy life as best we can through chattering teeth and wind-kissed cheeks.

We took the children to an outdoor Ice Skating rink like we had promised we would.

I had entered “Outdoor Ice Skating” into the search bar on Google to see where the closest place would be.  We live smack dab in the middle of the state.  Yet, there are zero outdoor rinks near us.  Out of the three towns within an hour of our own, everyone had an indoor rink.

I know of three outdoor rinks in Chicago, but didn’t really want to drive there since it’s colder in the north.  So, we headed south.  To Saint Louis.

We live closer to St. Louis than Chicago.  It’s only a two hour drive for us.  So, we headed to the home of the Gateway Arch and did some outdoor skating.

The weather topped out at a whopping 18 degrees the day we went.  The skies were mostly sunny, so that helped immensely to keep the chill away.  And the rink was piping out music from the 1950’s to keep our momentum going as we spun around the large oval of ice.  The building and rink were first established in 1957, so they are keeping things old school.

My daughters are at the ages where one complains before she even starts a task (she’s a month shy of becoming an official teenager) and the other is gung-ho about every event presented to her.  She’s nine.

After getting laced up with their rental skates, they hobbled out to the ice.  Neither had ever really been ice skating (the soon-to-be teen last ice skated when she was about 4 years old) and I reminded them that they would probably do fine after a couple of laps.  To not get discouraged if they weren’t doing triple salchows after one go at it.  They are both good at roller skating and it’s essentially the same principle.

After much falling by little sister and a few tumbles from big sister, they got the hang of it.  And we continued ice skating for another two hours.  We stopped periodically to refresh ourselves with hot chocolate and candy bars.  Man-Farmer doesn’t skate so he took pictures of us and enjoyed the millennials that were on the ice as well.  Many stood around taking selfies of themselves instead of actually skating while the others clung to the railing, too afraid to let go and possible making fools out of themselves.

I am proud to say that I didn’t fall once.  I haven’t been skating since the soon-to-be teen and I went out on the ice almost 8 years ago.  I was a bit afraid that if I did land on the frozen ground, that my old bones would shatter.

Before we got to the ice rink we had stopped at the Saint Louis Science Center to catch the Discovery of King Tut exhibit before it ended.

Our soon-to-be teen has had a love affair with all things Egyptian since her days in the cancer ward at the children’s hospital.  This exhibit did not disappoint her. 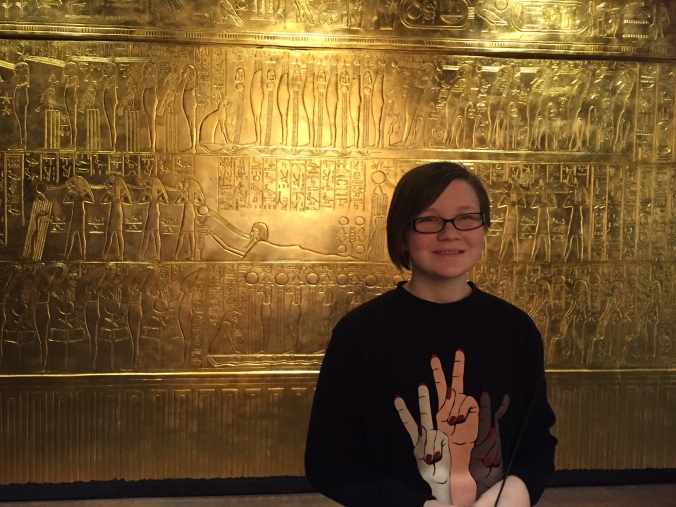 Her sister did tap her father on the arm halfway through the rooms of golden treasures and hieroglyphics to state “this was NOT worth the $60 you spent to get in.”

To each their own…

Earlier in the week I did go to Chicago.

I did travel with a man, though.

My college friend Mark lives an hour north of us with his family and he and I have taken several trips together to visit our friends from our Illinois State University days.

We call our trips “Good Will Tours” and we like to visit friends who seem to need a dose of sunshine.

Not that we are really full of light and goodness.  But, we do offer new and honest opinions on things presented in life.  We are both happily married and have been raising our four children (my two daughters vs. his two sons) so we are good at offering both points of view to our friends.

One friend we visited on this last trip has been doing some on-line dating.  She’s had more misses than hits.  Another friend has found a partner on-line and we got to meet her new girlfriend at dinner.  It was nice to see our friend, who has had a hard time figuring out who she is and what she wants from life, happy.  Her new gf was super nice and I hope to see more of her in the future.

I ate some good meals out and had to drive part of the way home, even though Mark’s car was used for the trip.  He came down with the flu Saturday evening into Sunday morning.  Sunday morning being the last day of 2017, New Year’s Eve.  His wife was at home just getting over the flu and he unfortunately was struck with the bug.  Nausea, lethargy, headache.  He missed out on our breakfast at a nice Southern inspired restaurant that I hadn’t been to in years.  Eggs benedict with a side of cheese grits hit the spot for me.

My kids are to start school tomorrow, their winter break is over.

An ice/snow storm may hit us tonight, though.

They may be here another day or two.

I’m hoping the weather stays away.  They need to get back into their routines of classroom antics, extra-curricular activities, and set bedtimes.

And I need to start planning for the soon-to-be teen’s birthday part in February.

It will be here before I know it and I have to schedule a date for her and her pals at the Escape Room that’s down the street.

An hour in a room that they are locked in and they will have to use clues to get themselves out of it.

At least there’s one of those locally…no need to travel two hours for that.

Volleyball #meridianhawks #volleyball #fifthgrade #mes #team #tweens #sport #gigisfirstteamsport #serve #overhandserve
This gal won her school spelling bee! #meridianhawks #mes #spellingbee #sonervous #firstplace #topspeller #smartgirlsrule #iwassweatin’
A year ago today our family lost our guy. Father Husband Best friend Calmness in any storm While our loss doesn’t affect your daily life, please know that it does affect us every morning that we wake up as a trio instead of a family of four. Please know that loss does not vanish or get easier. Please know that my children are still fatherless everyday. My loss is much different than their loss...theirs is harder. I don’t tell you any of this so that you will feel sorry for us. I tell you this to remind you to LIVE. Live your life with purpose. Live your life with love. Live your life with compassion and empathy. Remember those in your own life who left too soon. And don’t forget to hug people. a hug=touch=connection As a way to honor Chad and those in your own life who have unexpectedly left far too soon, HUG someone extra long and hard this week. Don’t be the person who lets go first though... #family #widow #loss #anniversary #live #hug #movingforward #familyofthree
Traveling around the world on vacation. #vacation #wdw #epcot #waltdisneyworld #animalkingdom #family #sisters #daughters #widow #winterbreak #florida #italy #germany #uk #france #china #japan #nepal #norway #norsegods #norsemythology #mexico #stitch #liloandstitch
Sunny Florida in January #vacation #florida #swim #sunshine #january
Some cool mini videos Disney does with your photo pass pictures. #disneyworld #wdw #florida #vacation #starwars #upthemovie #towerofterror #sevendwarvesminetrain
Follow Cheshire Farm on WordPress.com